Ukulele’s ‘too similar’ to UKIP

Kevin Tyrrell from Budleigh Salterton had his ambitions of running in the general election quashed as the name of his Ukulele Independence Party was rejected by the Electoral Commision. Ref exb 1594-13-15SH. Picture: Simon Horn

A budding politician has seen his bid to bring a four-stringed revolution to British politics thwarted - after election chiefs rejected the proposed name of his party.

Kevin Tyrrell, 51, was hoping to stand as a candidate for East Devon’s parliamentary seat in May - under the banner of the Ukulele Independence Party.

Policies included free ukuleles for hospital patients and a new bank holiday to celebrate the birth of George Formby.

However, his dreams have been dashed by the Electoral Commision, which ruled that the name was too similar to that of the UK Independence Party (UKIP).

Reacting to the decision, a disappointed Mr Tyrrell said: “I think it’s a bit insulting to the voters of East Devon to think they can’t distinguish between UKIP and a ukulele. You can imagine bureaucrats sat round debating it and coming to their decision.”

Dad-of-two Mr Tyrrell, of Knowle Road, Budleigh Salterton, says the Electoral Commision website promised a decision in 30 days, but it actually took 56 - leaving him with too little time to come up with another plan to stand.

He has also lost a £150 non-refundable deposit for his application.

Explaining his choice of party name, Mr Tyrrell, a member of the Budleigh Ukulele Strumming Club, which meets at the Salterton Arms, said: “Every politician needs an angle, and I suppose mine was the ukulele.

“It’s such an inoffensive and non-confrontational instrument. People’s first reaction when they hear it is to smile, so it seemed quite a nice weapon to ‘go to war’ with.

“Everyone’s always sniping from the sidelines about politicians and how rubbish they are, and the only way to do anything about it is to get involved yourself.

“But rather than standing as something totally serious, I wanted to put a bit more fun into the process.”

Mr Tyrrell, a director of a market research company, added that his choice of party name was not meant as an attack on UKIP.

He said: “I’ve got no feelings against UKIP in particular. I was just having a bit of fun with the political process.”

When asked how the ukulele club had reacted, Mr Tyrrell said: “They were quite disappointed, as I think they were quite up for wearing a rosette, parading around with ukuleles and showing their support.” 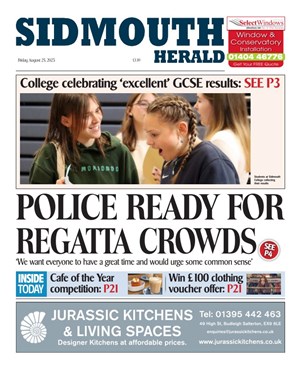 Ottery St Mary chairman: ‘The only way to survive is to follow strict guidelines’